An Intimate Look at JP That Is Largely Appreciative, Skips Over His Ideological Inconsistencies 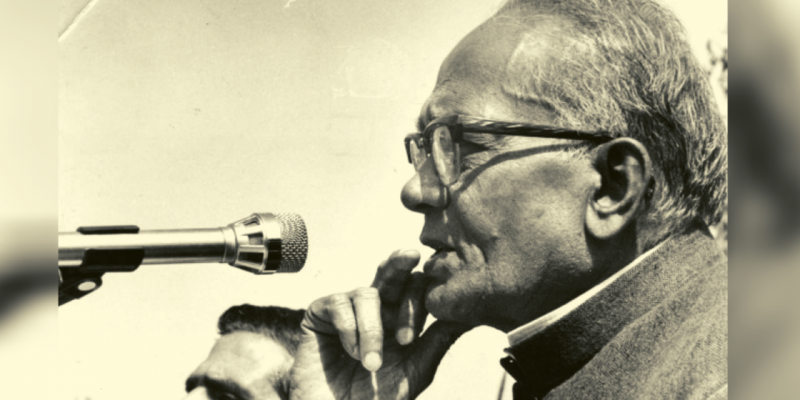 When I arrived at my office, the first question to be revealed was about the authors of the book The Dream of Revolution: The Biography of Jayaprakash Narayan. Bimal Prasad’s name on the cover was somewhat confusing. The retired academic and India’s ambassador to Nepal in the early 1990s passed away several years ago. It couldn’t be an unknown name because the co-author was his daughter, Sujata Prasad, a retired government employee and author of other books.

It then turns out that she was drawn to the business after her father’s death in November 2015. He started working on JB’s biography after compiling 10 volumes of his selected works. In the words of Sujata, he left behind a comprehensive blueprint and the book is to fulfill a promise made by a daughter to her dying father.

Bimal Prasad and Sujata Prasad
The Dream of Revolution: The Biography of Jayaprakash Narayan
Vintage Books, 2021

The late academic, and thus his daughter as well, had a decades-old personal association with JP. Not surprisingly, the book is a treasure trove of minute details from the life of one of India’s most important leaders of the twentieth century. This convergence certainly results in an unmistakably sympathetic description of a leader whose career and positions deserve admiration as well as criticism. The book isn’t quite up to the mark though, after a few pages, readers will realize that it’s not a critique, and that JP is cast in Napoleon’s hue.

However, the book is pertinent to the topic in a contemporary way because discussions about the absence of political alternatives to the current system ultimately do not interfere in the absence of a JP-like figure acting as a hub. A consensus has rightly been formed in political discourse that the agitation that led Indira Gandhi to impose a state of emergency in June 1975 was not to take on a mass character, but for JP’s presence and ability to carry varying shades of political opinions with him.

There is no denying Narayan’s catalytic role in the most effective narrative of mass movement change after independence and the eventual formation of the Janata Party government in 1977. However, the centrality of this aspect of his life has also limited public understanding of his entire political career. With influential writing backed by an endless reservoir of research material, the book presents JP and his life in all of its myriad forms, personal as well as political.

The author sensitively details the formative early years in Narayan’s life during his student years in the United States. This department has been enriched by a “textile-rich image of its era” on campus. During these years Marxist thought and ideology made a lasting impression on Narayan. These matters were later made clear in his advocacy of socialist thought over decades, initially under the auspices of the Socialist Congress Party (CSP).

In contemporary historiography, the existence of the CSP and Narayan’s consistent role as a pressure point, or observer of socialist thought, is often overlooked. In a Congress marked by divergent political views, Narayan rallied support for socialism as a redemptive force and recruited many others who eventually became supporters of the socialist movement. Besides the fine details of how Narayan extracted socialist ginger groups from different parts of India, the book offers glimpses of the price he paid for it.

For example, in 1937, following the Vizpur, Maharashtra, Congress, editor searchlight, the pro-congress Patna newspaper launched a ferocious attack on Narayan. The paper claimed – and this has a peculiar echo of the agitation of present-day farmers – that the peasant movement advocated by Narayan was “full of unpatriotic saboteurs”. The book gives a detailed account of his exchange with Rajendra Prasad about Narayan’s support and former opposition to the Patna peasant grouping.

Despite his passion for socialism, the author asserts that Narayan was balanced and unobtrusive in his pursuit of the idea. His admiration for Gandhi is detailed, and it is noted that although he disagreed with the Mahatma on many crucial issues, Narayan was certain that the national movement could only be waged “under Gandhi’s leadership”. An in-depth account of the disputed Tripuri Conference was given in 1939, when a crisis erupted over the re-election of Subhash Chandra Bose as president and Gandhi’s promotion of Pattabi Sitramaya. At that point, Narayan chose to remain neutral because he felt Gandhi was “a formidable force in history. We must go with history.”

Despite this support, relations between the socialists and other leaders became more fragile thereafter, and the book recounts this process in great detail. Eventually, after Gandhi’s assassination, the space for CSP within Congress shrunk, and finally in 1948 the two groups separated. Narayan was left carrying the banner of socialism when Nehru was simultaneously approaching the right-wing forces within the Congress, making any advocacy of the socialist idea from the panel critical of Nehruviism very difficult.

Although Narayan’s legacy is measured primarily on his role in providing leadership to agitate against the mismanagement of Indira Gandhi after 1971 and the imposition of a state of emergency, the Prime Minister was involved in a friendly relationship that lasted decades. This has been treated extensively and it is instructive to learn in today’s world of slanderous politics, how Narayan maintained decency in his critique while in turn respecting a principled opponent.

Undeniably, Narayan provided political legitimacy to the Sang Barivar duumvirate from RSS and Jana Sangh. His all-out anti-Congress made him blind to the future dangers of India’s right wing and saw him make a questionable statement: “If I am a fascist, I am also a fascist”, at the Jana Sang meeting in March 1975. Moreover, Narayan’s subsequent call also for institutional rebellion, From the Chief Justice of India to the Armed Forces and Police of India, he was very dangerous. The book fails to provide details of JB’s process of making such questionable calls, if he had discussed them with his colleagues and their impact on the anti-Congressional programme, as many of his fans and supporters felt his appeal to the armed forces was a betrayal. The authors provide many examples of Narayan inconsistencies but the reader does not get an insight into what led to this.

As a result, this generally remains a discretionary account of a controversial political career although it seeks to compensate by being a detailed history of the opposing face of Indian politics, both before and after independence. Anecdotes, personal archives, and scholarly commentaries are very efficiently arranged to make the book a tribute to both the subject and to the scholar who is also named on the cover as lead author.

Nilanjan Mukhopadhyay is a writer and journalist based at NCR. Include his books RSS: Indian Right Icons And Narendra Modi: The Man, The Times. tweeted at Ilangan Udwin.