A Biography of E.O. Wilson, the Scientist Who Foresaw Our Troubles 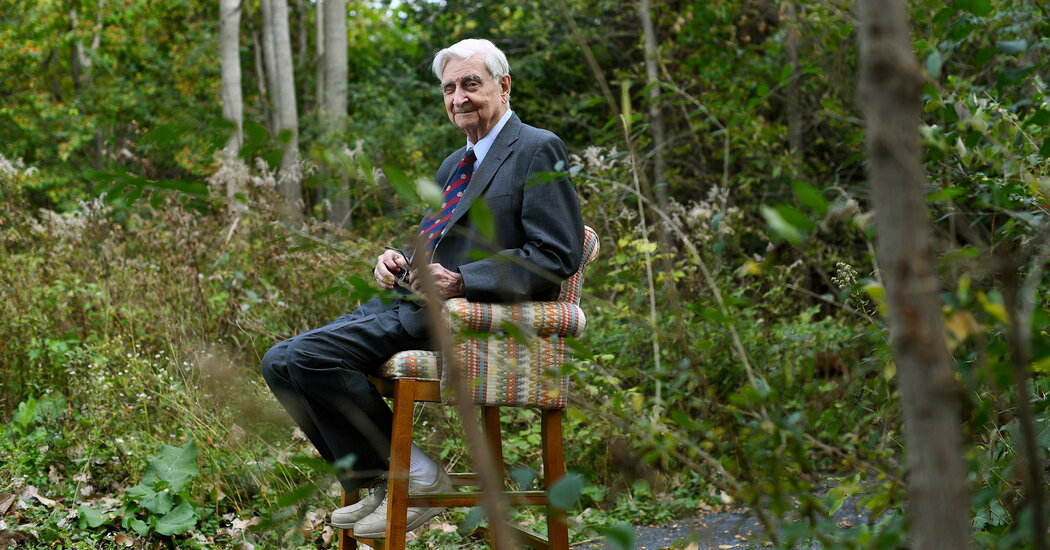 Scientist and naturalist E.O. Wilson has always reminded me of the great German musicologist of the nineteenth century and explorer Alexander von Humboldt: both obsessed with empirical observation and detailed field study, they are wonderful synthesizers. They have the ability to focus on the tiniest detail—the small gland of a fire ant, for example, in Wilson’s case—but they can also zoom out to examine comparative patterns across species and global environments. Their minds are microscopic and overlapping at the same time. Their science books are extensive and meticulously researched but also reveal their deep love for the natural world. And both are motivated by what Wilson calls “amphetamine amphetamines.”

Wilson did not have a happy childhood. Born in 1929 in Birmingham, Ala., his parents divorced when he was seven, after which he lived a mobile life with his alcoholic father. Over the course of nine years, Wilson went to 14 different schools. He found comfort in nature because “the animals and plants I could count on,” he later explained, “were more difficult human relationships.” The little boy spent as much time outdoors as possible—”Uganda and Sumatra became little,” recalls Wilson’s Rock Creek Park in Washington, D.C.

He was a skinny teenager crawling on the forest floor in search of the wonderful “underworld” of ants. A childhood hunting accident left him partially blind, so he directs his healthy eye to small objects that can be picked up and brought up close for inspection. At the age of thirteen, Wilson decided to survey a vacant plot next to his family’s home to find every nest and species of ants there. He made, in his words, “the discovery of a lifetime” when he spotted an ant he had never seen before: an invasive red ant that had arrived from Argentina. In 1942, when he discovered it, no one had yet reported the presence of the invasive species in America. He also became a loyal member of Boy Scouts, an organization that brought his two favorite activities together: outdoor life and natural history.

Most of these childhood descriptions are based on Wilson’s own memoir, The Scientist of Nature, which Richard Rhodes quotes extensively and almost exclusively in his new autobiography, Scientist. It is also through these quotes that the reader is closest to Wilson as a person. Although Rhodes met and interviewed Wilson, it included little about Wilson’s later private life. We meet the natural scientist, the scientist and later the activist, but not the husband, father, and friend.

By the time he was a teenager, Wilson knew he wanted to be a field biologist. In 1946, he entered the University of Alabama at Tuscaloosa and continued his studies in 1951 at Harvard University, where he later completed his Ph.D. Rhodes describes how a series of guides took the young man under their wings. Besides Wilson’s career story, Rhodes provides a useful broader scientific context, such as the brief description of Darwin’s theories he gave when describing Wilson’s immersion in evolutionary biology (a term that Wilson himself coined in 1958). Similarly, Rhodes writes about the discovery of the double helical structure of DNA when determining how Wilson met his co-discoverer James Watson.

The clash between the two young biologists who began teaching at Harvard at the same time, in 1956, is a poignant reminder of the divisions in biology in the mid-20th century—”molecular wars,” as Wilson called them. Buoyed by his success, Watson believed that biology should move into laboratories to apply the principles of physics and chemistry. He looked down on field biologists like Wilson, or “stamp collectors,” as he called them sarcastically. And although Wilson was excited about new developments, he believed there was more to biology than molecules—he was interested in relationships within and between species. Wilson remembers Watson in his memoirs as “the most obnoxious human being I have ever met”. The hate was mutual. When Wilson secured his position at Harvard University, Watson stomped the halls of biological laboratories, shouting a series of expletives. Wilson retaliated by calling Watson the “Biological Caligula”.

Rhodes continues his story of Wilson’s career by telling the world’s experiences about ant communications and island ecology, as well as publishing and receiving some of his most famous books, such as Insect Societies in 1971, his controversial book Social Biology: The New Synthesis 1975, and his 1984 treatise “Biophilia”. All this is interesting enough but the talk is sometimes a bit flat. In his analysis of Wilson’s books, for example, Rhodes relies heavily on long quotes from cited publications, rendering the text antiquated. Given that E.O. Wilson himself is a great writer, it is somewhat wrong that his life is not told in all the changing and colorful nuances.

Wilson is a scientist who celebrates the wonders of nature. He popularized the term “biophilia,” defining it as the love of the natural world and “the rich natural pleasure that comes from being surrounded by living things.” He eventually became an activist, one of the few scholars who dared leave the comfort and safety of the ivory tower. The impetus, Rhodes explains, was a report in the late 1970s, published by the US National Research Council, which stated that the world is losing one species per day, not one per year as most biologists previously believed. Rhodes describes how Wilson has made it his mission to create public awareness of this mass extinction and loss of biodiversity. Wilson mobilized his fellow scholars, wrote articles and books, gave lectures and tried to convince others of his case. He also emphasized the importance of field biology. How can we hope to save the species from extinction, Wilson asked, if we don’t even know it?

Wilson is the author of more than 30 books and nearly 500 scientific papers. As Rhodes summarizes in the final chapter of Scientist, he has established a new field of scientific research, has received more than 45 honorary degrees, is a member of more than 35 scientific organizations and societies, and won dozens of awards—and yet has accomplished much more. I suspect Wilson has inspired many young men and women to switch lab coats for muddy boots and go out into the field again. Like Alexander von Humboldt, Wilson is also a professor of scientific communication.

In the past, Wilson has deployed a fine storytelling technique to convey his arguments. I have read many books on nature, climate change and biodiversity loss, but I will never forget a short passage I came across five years ago in Wilson’s book Half the Earth. In one of the first chapters, he wrote about the retreat of freshwater mollusks (which are very important for filtering and cleaning water) in American rivers. He ends his account simply by listing the names of all the river mussels that have been driven to extinction in the Mobile and Tennessee river basins so we can work out their loss: coosa elktoe, sugarpoon, angular riffleshell, Ohio riffleshell, Tennessee riffleshell, foliage, yellow flower, narrow catspaw, and 10 other types. It’s a brief obituary, but deeply moving in a sobering way. are lost. All of them. forever. It’s also a clip that shows how Wilson combines the small details with the bigger picture, scientific observation with emotional sentiment. Little of this passion appears in The Scientist. Rhodes is clearly a fan of Wilson, but unfortunately, this short biography only scratches the surface of the wonderful life.