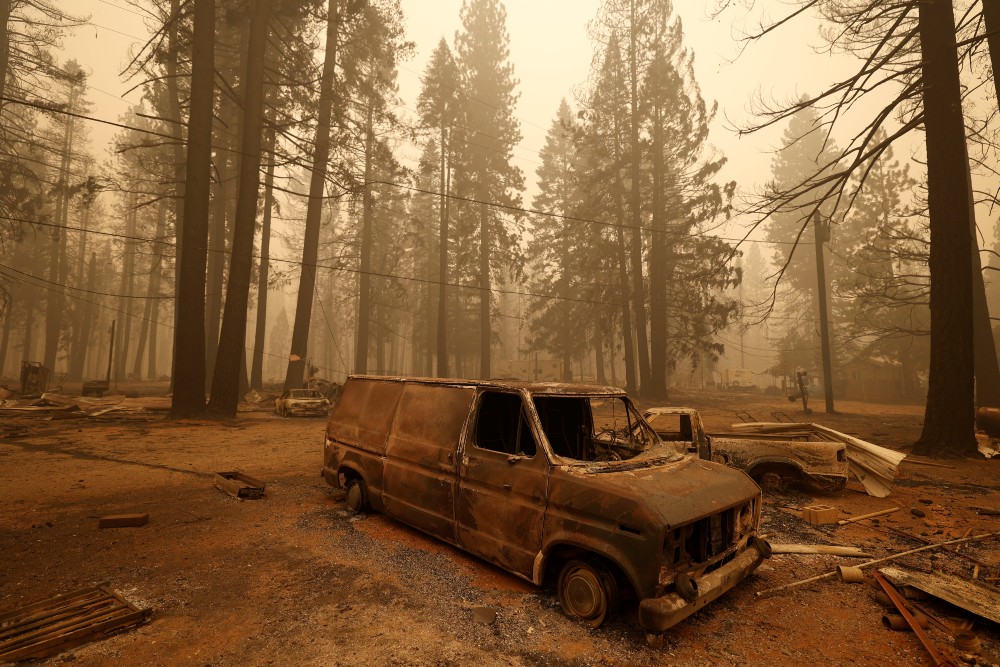 Tony and Jan Dunn never thought they would leave California. They grew up in San Diego, built a life together in the state and planned to retire here.

But after a wildfire ravaged the northern California town of Paradise three years ago, burning down their entire home, they were unable to obtain insurance to purchase another home.

“We’ve basically been priced out of California,” Dunn, a retired planner, told Reuters from the couple’s new home in North Carolina.

“It was sad because we both spent our whole lives in California,” he added.

Thousands of homeowners and businesses from California to Australia are in a similar situation as the insurance industry, known for its willingness to cover anything from Bruce Springsteen’s vocal cords to alien abductions, is having trouble dealing with climate change.

The British hosts of the United Nations climate conference in Glasgow on Wednesday acknowledged that current pledges to cut greenhouse gases are not enough to avert climate catastrophe.

Insurance broker Aon said in a report last week that “extremely anomalous” floods in Germany and China this year had caused record insured losses in those regions.

“Insurance companies are pulling out because no one wants to be in the business of losing money,” says Attila Toth, CEO of specialist risk analytics firm Zesty.ai. “And if they don’t trust their traditional models, they worry they’re going to lose money.”

Insurance statistics show the urgent need for such innovation.

For example, the average number of large wildfires in the United States has risen by 30% over the past 15 years and nearly a fifth in just the past five years, according to Lloyd’s Insurance of London Chaucer.

Altogether, insured losses for so-called “secondary” risks like floods and wildfires – rather than closely tailored risks like hurricanes – have nearly doubled over the past decade, according to data compiled by Swiss Re.

The reinsurer expects no slowdown, and expects a 30-63% rise in insured losses for all types of natural disasters in developed markets by 2040. China, Britain, France and Germany could see a rise of between 90% and 120%.

Given the momentum, it’s no surprise that traditional models can’t keep up, Bruce Carnegie Brown, chairman of the insurance market at Lloyd’s of London, told Reuters.

“If you get to an exponential part of the curve where all of a sudden, something is accelerating, we’re almost certainly underestimating the risk we’re taking.”

Policyholders are already feeling the pressure, with coverage getting more expensive or harder to come by.

The latest data from the California State Department of Insurance showed that non-renewal of homeowners’ insurance policies rose 31% from the previous year in 2019 to more than 235 thousand. The data for 2020 may be similar, according to Carmen Palber, CEO of Consumer Watchdog LA.

Across the northern border, the Canadian Insurance Bureau warned on its website that homeowners may not be able to purchase a new insurance policy if they experience a fire.

Among those who have pulled out of California home insurance are some family names – Liberty Mutual, Nationwide and State Farm. Liberty Mutual said it was a “difficult but necessary step to reduce public exposure to wildfires,” a sentiment echoed by other insurers.

“This is really a consensus of interests.”

Analysts say that reinsurers, with their global reach and long history of insuring catastrophe risk, have a role to play in helping the industry adapt to climate change.

Ernst Rauch, chief climatologist and geologist at Munich Re, said the group has the experience and preparedness for climate risks.

Rauch said the 141-year-old company set up a team to work on natural disasters and climate change in the 1970s after noticing that loss patterns began to change due to weather-related events.

“We have seen a continuation of years with much higher losses compared to the last 35 years or so. This is reflected in our models, he said.

However, there was a gap between what the reinsurer considered a fair premium and what the insurers were willing to pay.

“We can only transfer these risks to our balance sheet if we get the premium we need to cover these risks, based on our own assessment,” Rauch said.

Rating agency S&P Global warned that even reinsurers could reduce their exposure to climate risk by up to 50%, describing their efforts to account for climate change as “nascent” in a recent report.

Industry experts also say that disasters such as hurricanes in Florida with a long history of causing significant damage, are designed more closely than floods or wildfires, which only in recent years have begun to cause significant losses.

This calls for reinsurance and independent risk modeling firms such as RMS and KCC to experiment with new ways of dealing with natural disasters.

One such approach is scenario modeling, in which insurers are presented with a number of potential climate impacts on their portfolios over a period of years, to account for “the full range of uncertainty,” said Laurent Mariscott, senior manager, EMEA, CIS, at RMS, that sells risk models to insurance companies.

Another method involves machine learning, which can be used to take existing models of floods in a particular area, for example, and map them to other parts of the world, Mariscott said.

But any advances in making insurance more available and affordable will come too late for Dunns.

“I had absolutely no intention of leaving California,” said Tony Dunn.

(Reporting by Noor Zainab Hussain in Bengaluru and Caroline Cohn in London; Editing by Tomasz Janowski and Elaine Hardcastle)