Israel’s Contradictions, Drawn With a Palette of Primary Colors 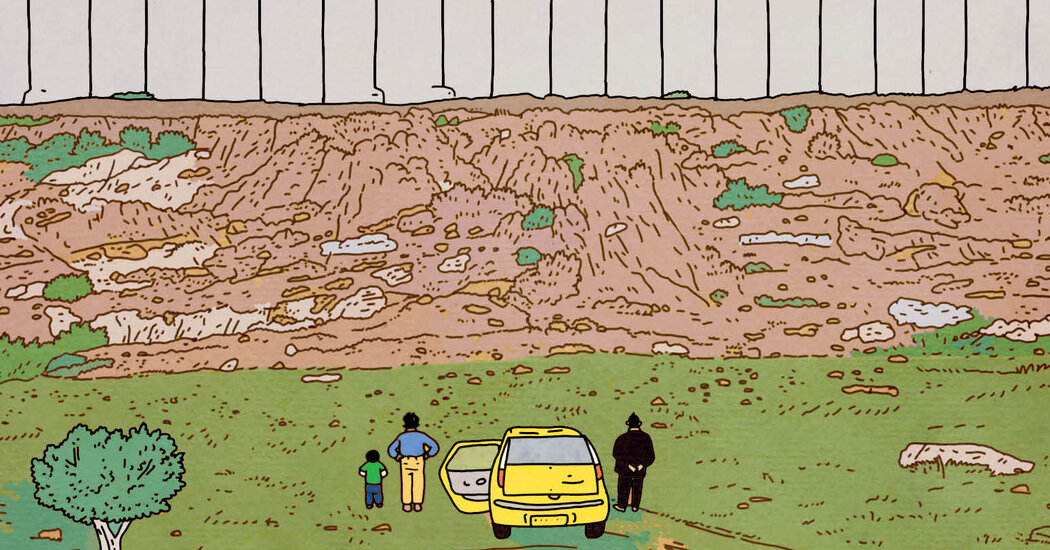 The story of the Israeli-Palestinian conflict is rarely told with much economics. Just asking where to start can stop things before they start. 1917? 1948? 1967? But Israeli novelist Roto Modan has managed to understand what is often completely neglected – emotional truth – and she has done so in a simple 11-page comic book.

My Pretty, first published in 2003, begins with a woman and her miserable fiancé arguing over his refusal to participate in the wedding preparations. Soon they are in a taxi, and the orator sympathizes with the driver, who – this is not unusual for Israel – takes on the role of prime minister of the state: “We just have to bomb them all to hell.” The woman, disgusted, demands an exit. As she was closing the car door, a nearby cafe exploded due to fire and glass. I ran towards the explosion, encountering a horrific scene. A man lies in a pool of his blood, legs open. She takes off her hair tie and makes a tourniquet, then gently hugs his head. You perform a mouth-to-mouth resuscitation, although in a Modan shot up close, it feels more like a passionate kiss. The man opens his eyes and says one word: my love. On the next page, the woman was sitting at home with her shirtless fiancé when she learned from TV that the dying man was actually the suicide bomber. “What does my beautiful mean?” She asks. Her fiancé said to her: “My beautiful.” We pull her face as she sips her coffee with her eyes closed and go back to talking about their wedding plans.

What is this kiss? A hatred that has become a kind of dependence on others. Corruption of everything, even love with violence. The stupid certainty of politics and ideology versus the pity of seeing a fellow human being dying. The whole bloody struggle.

Modan started making comics in the early ’90s, almost single-handedly bringing the look to Israel, where even Tintin and Superman were strangers, she says. At one point she ran a Hebrew edition of Mad magazine. Her three graphic novels, including her most recent, TUNNELS (Tie and Quarterly, $29.95), this month, they were all published in English and made her the most popular cartoon artist in her country.

Do you want to keep up with the latest and best books? This is a good place to start.

“My Pretty” was a turning point for Modan. She had previously resisted portraying the privacy of the Israeli reality. Born in 1966, she is part of the post-Six-Day War generation, which, at least among her cohort of Tel Aviv city-dwellers, strayed from the unquestioned Zionist fervor of her parents and grandparents. “I love Israel and I hate Israel too,” she said in a 2013 interview.

All Israeli artists face the burden of the expectation that their work must not only deal with politics, but also contain some kind of key answer to the country’s existential dilemmas. This, of course, can be a creative killer and a route to publicity. Israel’s greatest writers have found ways out of this trap, revealing their greatness in the process. This also applies to Modan.

Her first complete work, Exit Wounds (Tie and Quarterly, Sheet, $19.95), still has a huge impact. Like all of her comics, it is brightly colored and has a perfect pace. Modan books are often read like mystery novels, filled with strange characters, missing people and the protagonist – always an awkward but determined woman – on a kind of search. “The Wounds Out” after a suicide bombing at a bus station. One victim remains unidentified, and a tall, young woman named Nomi (nicknamed “Giraffe”) is convinced that her greatest and greatest lover has died. She finds his estranged son, Kobe, a grouchy taxi driver, and the two begin an investigation of sorts—uncomfortable, because he hates his ignorant father and she mourns her loss. Their research takes them to different regions of the country as they gather clues, and the plot and relationship between them deepen.

The story is bleak but the Modan board is like a Skittles bag. Its people enjoy the fun caricatures of Hergi characters – when they shed tears, they appear as waterfalls dripping down their round cheeks – and its pages follow his picture. clear line pattern. Each painting is full of action, which has at least partly to do with the unusual process she developed for her graphic novels: she “throws” the actors she portrayed as they play the story and then uses the images as the basis for her drawings.

It would be confusing to locate an Israeli woman for Modan’s books in their places – on suicide bombings and insulting taxi drivers. Rather, it lies in their recurring themes: missing parents, the search for a sense of self, and inherited trauma. These are, of course, global concerns, but they run wild in such an unstable country, which does not even have clear borders. The same preoccupations also appear in Modan’s second book, Proprietorship (tie and quarterly, $24.95), the story of a woman who takes a trip to Poland with her grandmother to find out if a family apartment building was lost during the war. Wandering through Warsaw’s hotels and city streets, the protagonist, like Numi and Koby in “Exit Wounds,” looks to rebuild herself, to find the pieces of her family’s identity that have been swallowed up by history.

“The Tunnels,” Maudan’s most recent book, is also her most outspoken political writing, although it doesn’t seem like it at first. We meet another turbulent adventurer, recent Indiana Jones with a khaki and shaggy black hair named Nellie, the daughter of a famous archaeologist bent on ending her father’s greatest expedition: finding the Ark of the Covenant. She told her young son that it would be a “treasure hunt”. But by page 55, Modan had us stumble upon the naked eye directly at the gray concrete slabs that make up the separation wall that surrounds the occupied Palestinian territory. It turns out that the likely location of the ship, revealed in an ancient inscription, is on the other side, and Nellie must start digging.

Modan never stops entertaining and genre-reliant—in this case, the absurd plot of the “Seven Samurai”—as Nellie gathers a diverse crew for the job, including a group of goofy young settlers and a Palestinian man named Mahdi who’s childhood diggers meet her father. There are conflicts and subplots (including another kiss, a subversive kiss underground between the Mahdi and the brother of Nellie), and despite the idea of ​​a group of people all wanting to claim the same land – who carried the land with axes and shovels – might seem heavy, Mudan brings it Lightness and escapes, as usual, from any education.

Everyone has a reason to participate in digging. The settlers want to find the Ark so that its sacred powers will help them defeat their enemies. Mahdi is trying to smuggle goods from the other side of the wall to the regions. Nellie mostly wants to take revenge on her ailing father, whose discoveries were stolen from him, and bring him glory before he dies. It’s a combination of impulses that lead to near-disaster, but it also shows the ways Mudan understands the part of the world in which she lives: a place that must learn to live better with the friction of competing narratives.

“Can’t I suggest that we write one story out of all the ancient stories, one that will be greater than all the stories put together?” Modan writes in the epilogue. A terrible, wonderful and turbulent story full of loopholes and contradictions? A place where people can live.”