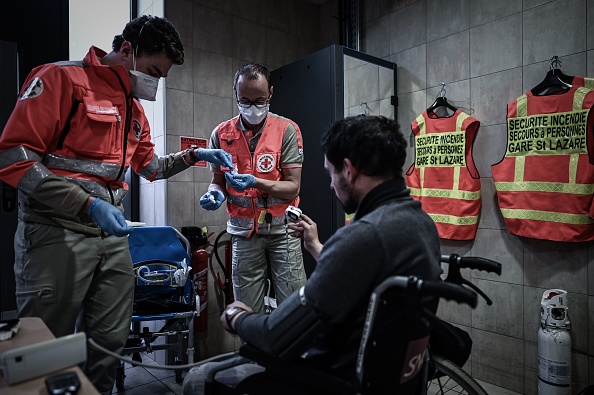 This wearable device can detect upcoming seizures, which can issue a warning to patients before their unexpected seizures occur, helping them avoid any accidents.

(Image: PHILIPPE LOPEZ/AFP via Getty Images)
Red Cross volunteers take part in an intervention of a man (C) who had a seizure on a train, and suffered an epileptic fit on a train, as part of Red Cross operations to enforce SAMU (French Urgent Medical Aid Service) at Saint Lazare railway station on May 5, 2020, In the French capital, Paris, during the lockdown in France with the aim of curbing the spread of the COVID-19 disease caused by the new coronavirus.

A wearable device that detects an epileptic seizure

A group of researchers has succeeded in understanding the patterns behind the seizure activities of patients with epilepsy through a wearable device.

The said wearable is already on the market for anyone who wants to get their hands on it. However, the algorithm that is supposed to predict seizures is unfortunately still a work in progress.

The findings, which could help patients left in the dark with their upcoming seizures, were published in a recent journal Nature.com.

The seizure prediction study provides epilepsy patients with a prediction that can extend minutes or hours before it actually occurs.

The study’s lead author revealed to the Heathday report that they were “predicting about two-thirds of patients’ seizures accurately,” at least on average.

Meanwhile, the chief medical officer of the Epilepsy Foundation, Jacqueline French, further noted that previous studies focusing on trends related to epilepsy have already hinted in the past that predicting seizures is not far from reality.

French, who is also a professor of neuroscience from New York University’s Langone School of Medicine, added that some researchers are already working to understand the dominant patterns of epileptic seizures in patients.

Thus, these researchers go on to demonstrate that seizure activities are not random in nature in contrast to some people’s belief. Instead, there is a pattern behind it that is still waiting to be revealed by further studies.

But despite ongoing studies on predicting seizure activities among patients, we still have to come up with a non-invasive method for predicting such seizures.

Even more worryingly, French noted that a third of epilepsy patients have seizures beyond their control.

The wearable device that predicts seizures

Now, to understand the underlying pattern of seizures among patients, the latest study published in Nature.com asked participants to wear a device for at least a year or six months.

The researchers also asked them to log their data themselves to cloud storage on a daily basis.

The wearable collects the same data that polygraph technologies also use, such as heart rate, movement, temperature and even blood flow, said Brinkman, the lead researcher.

It also revealed that the team behind the study used data from the wearable device to train an artificial intelligence algorithm, which can accurately provide seizure predictions minutes or hours in advance.

Related articles: [LEAK] META develops a smart watch with a front camera | Can it beat the Apple Watch?

This article is owned by Tech Times

ⓒ 2021 TECHTIMES.com All rights reserved. Do not reproduce without permission.