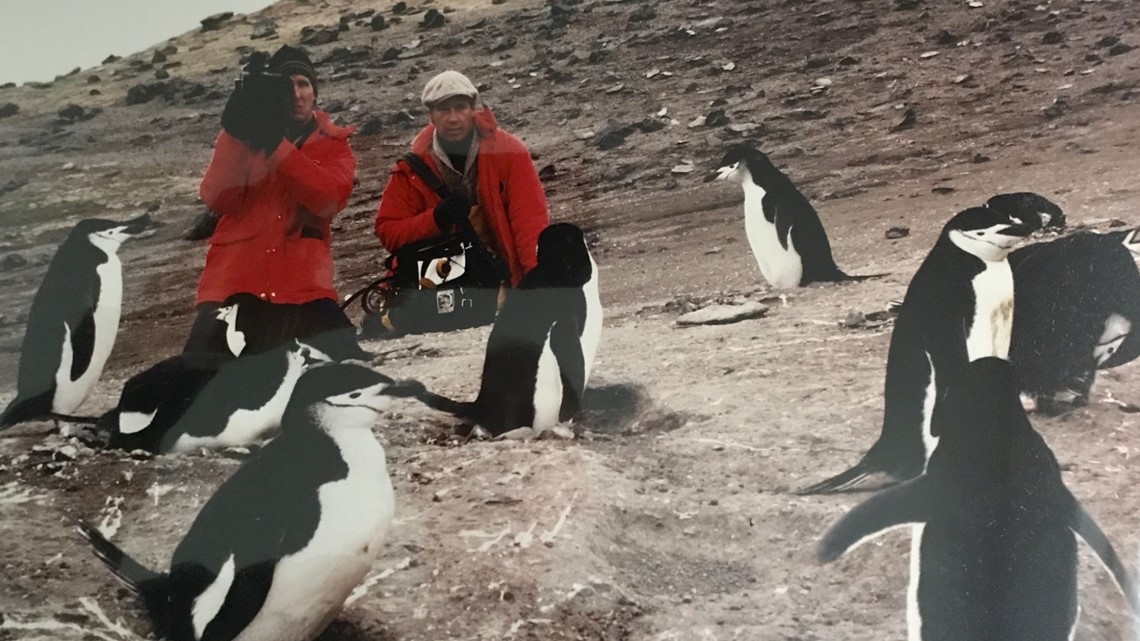 We are excited to present this five-part series again after 33 years. It’s a fascinating look at the people and animals that live in the coldest place on Earth.

News8 traveled to the bottom of the world in February 1988. Journalist Lauren Nancaro and photojournalist Bill Tracy made the harrowing journey from San Diego to Antarctica to deliver a five-part special that aired on five consecutive newscasts. We are thrilled to introduce it again after 33 years. It’s a fascinating look at the people and animals that live in the coldest place on Earth.

The full special can be watched above or here on YouTube. Here are some of the highlights of the series:

First in the series, the News 8 crew arrives on the Explorer cruise ship that Lauren describes as a science platform and sometimes a floating embassy. The trip is long and boring – and includes some seasickness for the News 8 team.

Lauren shares some of the history of Antarctica and the researchers who have traveled there – some of which have not survived. It also talks about the current population and what it takes to live in such a remote place.

Penguins: It’s hard to imagine a more attractive animal than this

Next comes the penguins, of course—the first thing you see when you arrive in or leave Antarctica, says Lauren. Ornithologist Frank Todd, a lead expert on penguins and the man responsible for penguin encounters at SeaWorld San Diego, talks about his ongoing search for the birds and their colonies.

Antarctica is a land of puzzles and some of the answers can be found in the icebergs. Two weeks into the trip, Lauren knows more about what the icebergs reveal; Animals that live on floating ice sheets, and talks with wildlife photographer Wolfgang Kahler about his craft capturing the pristine beauty of Antarctica.

The unique role of Antarctica as a research center is explored in the next part of the series. The treacherous conditions for studying the untapped land are seen firsthand when Lauren and the crew observe scientists trying to reach shore.

Cold is a permanent obstacle to rest.

With Lauren and Team News 8’s journey coming to a close, they take one last look at what it means to stay in Antarctica – to cultivate life, animals, and humans. “A year is the longest time most people can take.”

Photojournalist Bill Tracy shares his memories of the trip:

“[It] It was an excursion sponsored by Sea World to accompany the curator of the birds, Frank Todd, on a mission to collect different types of penguin eggs in order to meet the newly opened penguin.

It involved two weeks of surfing on the high seas to roam various penguin groups in the Antarctic “banana belt” near the Arctic Circle. This is so named because of the “mild” December weather. It’s still relatively Balmy because the ship we later sailed on hit an iceberg in those waters and sank.

Another side note… Lauren and I were both legally taken off the ship before it left Chile for not informing the Pinochet government that we were leaving the country. We were given this warning by Chilean customs when we arrived in Santiago, but we didn’t think this trip counted because Chile claimed most (illegally) parts of Antarctica that we were visiting.

We were held separately in holding cells in a police station in Tierra del Fuego for about an hour before being returned to the ship. At this point, both of us were starting to develop symptoms of food poisoning from something we had eaten in Santiago the day before, so sitting in an isolated cell was very stressful, to say the least.

Punta Arenas, where we left, was a great place but we weren’t there long enough to see much.

Also in December, the sun never sets…just kinda makes a little circle around the horizon. But that made the light beautiful.”

Watch the five-part series on YouTube below or in the video player above: