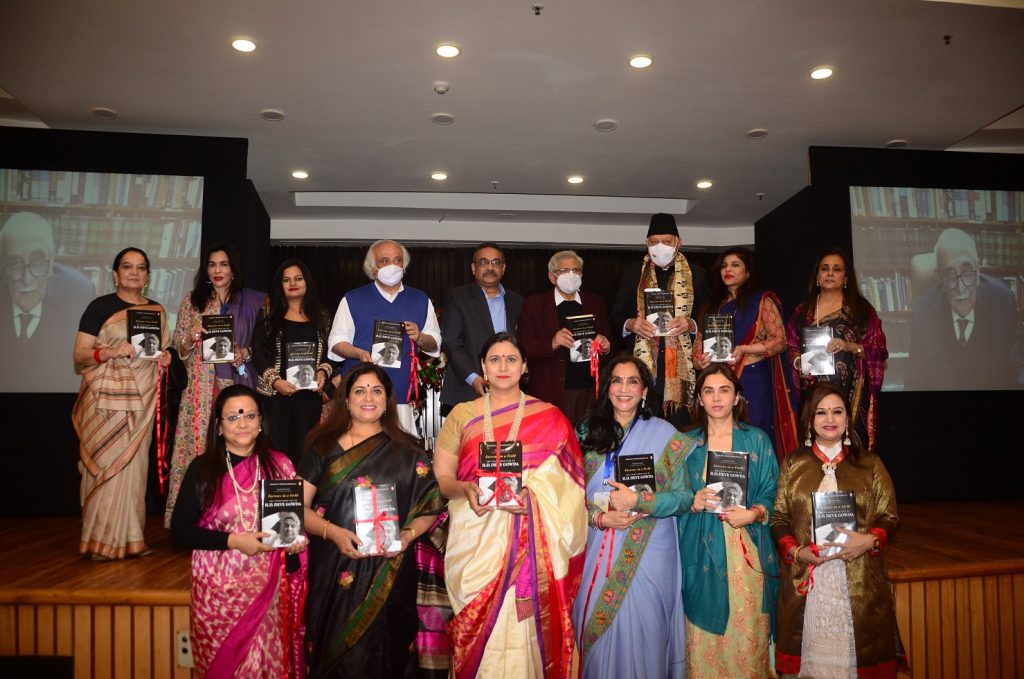 NEW DELHI: The Prabha Khaitan Foundation, which is organizing a five-day book festival from December 13-17 at India International Surrounding Center launching books in the name of the Book Festival, kicked off the first day of the festival with the launch of its first autobiography titled “Grows in a Field” published by Penguin Random House India on Former Prime Minister of India HD Deve Gowda by Sugata Srinivasaraju in the presence of Mr. Deve Gowda himself.
Majestic gathering including politician, Jammu and Kashmir National Congress Chairman and former Prime Minister, J&K, – Farooq Abdullah; Politician and leader of the Communist Party of India, member of the Politburo of the Communist Party of India – Sitaram Chouri; Economist, historian, politician and member of the Indian National Congress – Jairam Ramesh shared their views on Mr. Gowda to a privileged audience.
Before the three star personalities spoke onstage and the author shared why his subject was chosen to write an autobiography, internationally recognized jurist and great lawyer, Vali Sam Nariman, Supreme Court of India, gave a wonderful tribute to the former prime minister. He said, “My wife and I have always thought that Mr. Gouda has not only a good head but a great heart as well.” “For him it was a mixed bag of victories and defeats, of honors and criticism, but as a statesman and diplomat, he was unscathed.”
Farooq Abdullah said some very touching words about Mr. Devi Gowda, and said he wanted people to remember “what a human being he is”. He recalled meeting him several times when, “Mr. Judeh decided to visit Kashmir at some very difficult times. He wanted to make a fresh start and find a way forward. He asked me are you going to take part in the elections? And so we started getting closer and not pushing them away.”
On this occasion, author Sujata Srinivasarago said in his speech, “When I started working on this book, in early 2019, people made fun of me. They asked does Mr. Gouda deserve a penguin biography? What did he really do? Is there enough to fill the pages? Now at the end of a year 2021, when they had a 600 page book, they say this is a ‘rehabilitation’ of his legacy. I’m glad they now realize he has a legacy, but I often have to correct it by saying this book project is not about ‘rehabilitation’ i.e. person, but rather about rebalancing.”
He further added, that Mr. Juddeh’s democratic participation was excellent and profound. This should have been celebrated in our democracy, but it seems we don’t care. A moment of reflection stares at us now, in 2021, when the hype of our threatened democracy has reached its climax. We sometimes ignore certain people, moments and contexts in history at our own risk.

Sitaram Yeshouri, who also finished reading the 600-word book, said, “There is very little to add to everything that has already been said about Mr. Judeh, but none of us were aware of his social class. He also praised the writer for his deep insight into the political debates that were paved when asked. of the current Chief Minister of Karnataka, HD Deve Gowda, with the approval of the Congress and the CPI(M), to head the coalition as Prime Minister after the Vice President. Singh and Jyoti Basu refused. He had not even completed 3 years of his main term. But he told Mr. Basu, ” We need to save India together.”

Jerome Ramesh described the book as “a brilliant, first-class autobiography based on a rich history”. He said that writing an autobiography on the life of a subject is very difficult, and addressed Mr. Judah as “Politics Jeevi for his 60 years of involvement in politics. In general, biographies are judgmental – they are either biographies or full of criticism. But very few of them are Prashthis.” or Caritas in the truest sense of the term. It is a biographical narrative.”
The release of the book was followed by a conversation with author Sujata Srinivasarago, Milli Aishwarya, publisher, Ibri Publishing and Vetage, Penguin Random House India, and moderated by Pranit Popper – a women’s sensation from Amritsar.