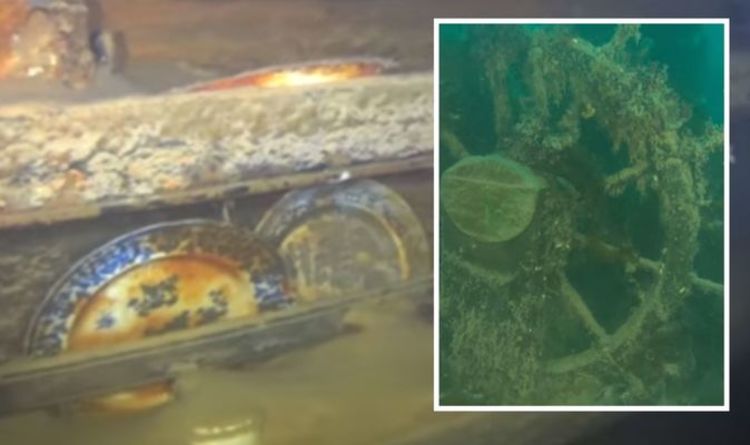 Tour Inside the Sunken HMS Terror with Parks Canada

Sir John Franklin led a British expedition that left England nearly 200 years ago in search of the Northwest Passage in the Canadian Arctic. The teams departed on two ships, HMS Erebus and HMS Terror, but disaster struck when both ships and their crew became trapped on ice near King William Island, in what is today the Canadian territory of Nunavut. Ships have been trapped in ice for more than a year. They were stocked with food for three years, along with a library full of Charles Dickens novels and other things, allowing the crew to survive as long as they did. However, by this point, Franklin and 23 other people had died.

According to National Geographic, the new expedition leader, Francis Crozier, decided to abandon the ships and attempt to venture across the ice to reach the mainland with more than 100 remaining crew members.

None of them survived.

The two ships were located in recent years – the Erebus in 2014, in the eastern outpost of Queen Maud Bay, and the Terror south of King William Island two years later, by chance in ‘Terror Bay’.

Although it was discovered in 2016, the terror wreck was not thoroughly studied until two years ago.

A team of archaeologists from Parks Canada made a series of seven dives into the legendary wreck in August 2019.

Archaeologist Ryan Harris told National Geographic at the time that it was as if the ship had frozen in time.

He said: “The impression we had upon exploration… is of a ship that has recently been abandoned by its crew, and that appears to have been forgotten over time.

“The ship is amazingly intact. You look at it and find it hard to believe that this is a 170-year-old shipwreck.

“You just don’t see that kind of thing very often.”

The crockery was still on the shelves. (Photo: Canada Gardens)

It was inserted through the hatches in the main hatch and in the skylights in the crew cabins, the captain’s rooms and various other parts of the ship.

They couldn’t believe what they saw.

Mr Harris said: “We were able to explore 20 rooms and rooms, moving from room to room.

“The doors were all eerily wide open.”

Dinner plates remained on the shelves, beds and desks were still in good condition, and Mr. Harris believed that even the early photographs could have been preserved.

do not miss:
Archeology: “Once in a lifetime discovered” hundreds of human skulls [DISCOVERY]
A breakthrough in archeology after studying ancient humans: “Colossal!” [QUOTES]
Stonehenge hacked after ‘amazing discovery’ in Israel [INSIGHT]

The crew of the HMS Terror is stuck in the ice. (Image: Getty)

He explained: “These sediment blankets, combined with the cool and dark water, create a near-perfect anaerobic environment ideal for preserving delicate organic materials such as textiles or paper.

“There is a very high probability that some clothes or documents will be found, some of which may still be legible.”

The team was able to retrieve images from more than 90 percent of the ship’s lower deck, including the living quarters.

The captain’s cabin proved to be a wonderful treasure – with enclosed map lockers, a tripod and a pair of thermometers among the identified artifacts.

Behind the ship’s only closed door were the captain’s sleeping quarters, the only part of the lower deck that could not be explored.

However, Mr. Harris and his team are still confused about how the ship sank.

He said, “There is no clear reason for the sinking of terrorism.

It has not been crushed by ice and there are no breaches in the structure.

However, it seemed that it quickly and suddenly sank and gently settled to the bottom. What happened?”

The drilling process will be slow and difficult, as the water is extremely cold, and the diving season is limited to a number of weeks – or sometimes days.

The bones were excavated in 2013, and analysis in May 2021 confirmed that they belonged to Petty Officer John Gregory. He was an engineer on the Erebus.

His remains were found 45 miles south of Erebus with two of his companions.

They died in 1848 after trying to avoid an avalanche death, but were unsuccessful.

As the excavation task continued, Mr. Harris concluded: “One way or another, I feel confident we’ll get to the end of the story.”