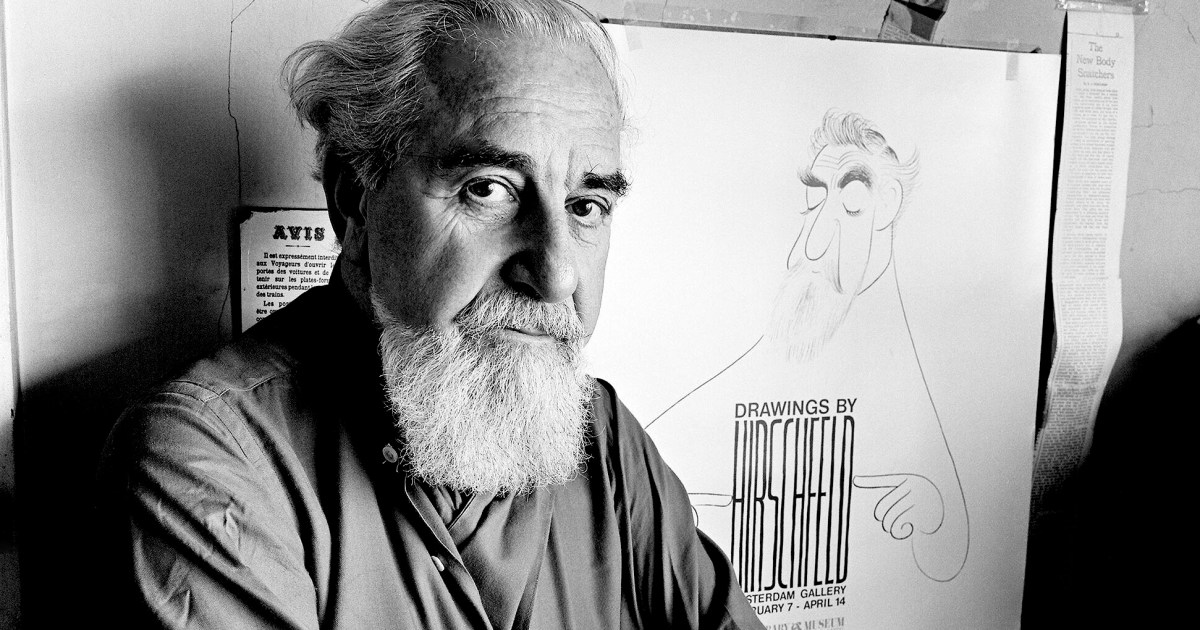 Fighting misinformation. Get a daily summary of the important facts. Sign up for free Mother Jones the news.

The national pastime has become a national frenzy, a common obsession among the millions of people who contemplate Hirschfeld’s comics on a scavenger hunt: The Nina Challenge. Can you spot the letters of his daughter’s name disguised in those sweeping lyrical calligraphy drawings?

Hirschfeld was the most prized and prolific cartoonist of the 20th century’s magazine, newspaper, and theater bills. He created about 10,000 drawings. If you stare at a lot of things, you’ll find NINA tucked away in tangles of hair, cheeks, smiles, and the roar of politicians and artists. The game was full of fun, and a bit of fan service, but there was more between the lines.

The artist’s seal – hiding a name – was dear to his patriarchal heart. It was also a proxy for a larger project, which prompted us to look closely and take note of what no one would have noticed, to see the big pictures in small details. This is one of the many ideas in Ellen Stern’s new autobiography, chosen by Hirschfield to write (and an author I’ve known for a long time as a friend’s family member). Her book is a compilation of press interviews with 325 people and a deep dive into the archives with surprising submissions and a hidden history.

It’s an enjoyable read. Previously New York And GQ magazines, writes Stern with the same cleverness as Hirschfeld. Both the author and artist are vivid storytellers. None of it strikes me as I follow the lofty academic exercise of contemplating the purpose of the pen—too heavy for Hirschfeld—but both open up a new way of understanding how caricatures reveal the essence.

There is an inconsistency between her style and his style. Where Hirschfeld embellishes the people he painted, Stern refuses to embellish him. She is a relentless journalist, a ruthless fact-checker. Take the day in March 1965 when Hirschfield visited the White House: President Johnson in his office, Hirschfield the guest of honor. The White House phone rings. Martin Luther King, Jr. is at stake. His voice is soared in the Oval Office by loudspeaker from Selma, Alabama, as King leads a march to a hornet’s nest for white supremacy. Hirschfeld bears witness to history.

Or so he is fond of saying.

Stern’s research casts doubt on whether the call took place that day, and whether Hirschfeld was a reliable narrator of the events. The daily presidential diaries “do not show, in fact, a phone call from or from Martin Luther King on March 9,” it found, “nor the records of the White House operators,” although MLK and LBJ “meet in person.” earlier “and spoke on the phone” days later, making Hirschfeld’s boast unbelievable. The archives confirm that during Hirschfeld’s visit, no call was made on the same day in the presence of the artist, although it is conceivable that the President did speak Around MLK. Stern asked if it was possible to make a call from the books, without recording, but her research found that unlikely. Instead of letting Hirschfeld skate with dubious bragging, she advances the facts and lands her deeper. Memory, in its capacity to build, is a muscle. It is bent, used and abused. Here we have Hirschfeld as a self-caricatured, turned sleight of hand on his experiences.

Stretching the lines was his skill on the page. Stretching events is a skill not far (note, journalists). But it’s one of the many lively stories in the page-flipping program that passionately recounts how brilliant he has been in presenting the world. The age of majority was marked by joy as much as anguish. The flu killed his younger brother, Milton, in 1919. (Al’s life was shattered by epidemics.) But Al never quit looking for joy and sharing with others.

He has made history. The FAA’s chief scientist used Hirschfield’s camouflaged NINAs to test pilots’ cognitive ability to spot hidden targets. Adlai Stevenson invited him on a military plane to visit King Solomon’s mines on a tour of peace. 14-year-old Al played baseball with 14-year-old Lou Gehrig. And the first caricatured stamps in postal history were Hirschfeld’s stamps (but had to delete NINAs because no stamps could carry “secret marks”, although he did enter them as signatures anyway).

Hirschfeld flirted with the powerful but was skeptical of authority.

At every move, Hirschfeld was courting the strong, but he was skeptical of authority. He was never too confident for professionalism. On the contrary, he joined the struggle against fascism and censorship in the 1930s and 1940s by directing anti-Nazi cartoons. He has targeted senators, status quo vigilantes, and hate radio hosts. He has advanced discussions of racial representation in newsrooms by presenting diverse works even when those newsrooms are not present. time He was commissioned in 1998 to paint five artists known as the Century. It rightfully housed Louis Armstrong. This led to a debate among editors about the difference between true diversity and performative gestures of inclusion for institutional appearance. It’s all on pages 314 to 316 of the autobiography, endlessly insightful.

What I appreciate most about this study is its finer detail less than the vanishing line it traces between how the caricature is hidden and revealed; The role of artists and reporters in illustration or obfuscation. How many media outlets are still engaging in caricatures? For good or evil? How many of us use caricatures to get to the point?

There are many ninjas to find in Hirschfeld’s drawings. And like many Ales in Stern’s biography. He hides, like those he painted in his ninety years, in plain sight.