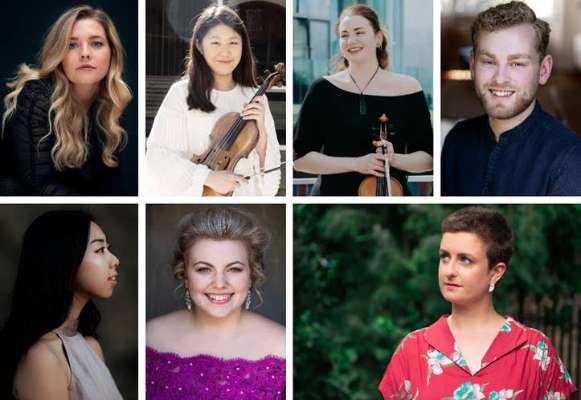 The numerous performance restrictions imposed by Covid-19 have not dampened the enthusiasm of this year’s seven young recipients of the Kiwi Music Scholarship.

The scholarship was founded in 2009 by Sven Stenbäck in memory of his wife, Maida Stenbäck née Saunders, a New Zealander who loves classical music.

It is to help advance the musical education of Aotearoa New Zealand citizens who have demonstrated achievement in musical performance (including vocal performance) or conducting.

The selection committee was pleased to have such an outstanding group of applicants, says its chair, Professor Emeritus Peter Walls.

“It is impressive to see these young people succeed in persevering with their excellent study plans despite the uncertainties and limitations imposed by the pandemic.”

25-year-old Felicity Tomkins from Te Puke in the Bay of Plenty is studying for an artist diploma at the University of Cincinnati – Conservatory of Music in the United States.

She previously completed a Masters in Music and a Bachelor of Music with Honors and Bachelor of Science degree at Te Whare Wānanga o Waikato – University of Waikato.

After strong musical foundations in New Zealand, including as a Dame Malvina Major Foundation Studio artist with NZO and at four NZO summer schools, Felicity is excited to embark on her first steps abroad. It has been described as a must-see sound on the national stage.

Moody Ding, 24, from Dunedin, was described by Professor Joanna MacGregor, chair of piano at the Royal Academy of Music in London, as “amazingly talented”.

Moody is studying for an advanced diploma at the Royal Academy, having completed a professional diploma there. Previously completed her MA in Music with Honors, Bachelor of Music with Honors and BA in English at Waipapa Taumata Rau, University of Auckland.

Despite Covid-19, Moody traveled to London to start her professional diploma in September 2020 and is now back after a break in New Zealand so she can train more freely.

Next year, Moody will make her debut at London’s Wigmore Hall, where she will perform with the Nash Band. As part of her Advanced Diploma, she will give a research-based musical performance on a postcolonial topic. Earlier this year, she directed a multimedia project in which she combined Ravel’s Miroirs with Colin McCahon’s art, contemporary dance, and animation.

She is also a poet, having poetry in two collections of an anthology of Auckland University Press published this year.

Moody is a former New Zealand National Concerto Winner and runner-up in the Wallace National Piano Competition and the National Youth Performance Awards.

Grace Francis, 30, from Cambridge, Waikato, is one of the most sought-after cooperative pianists at New York’s Juilliard School, an important achievement in a competitive group of distinguished pianists.

Her talents outside of school were also recognized by such notable figures as soprano Rene Fleming and the chiefs of the musical staff of the Metropolitan Opera and San Francisco Opera.

Grace is working at Juilliard as a New Zealand Fulbright Scholar and has just completed her MA in Music there, having graduated from the University of Auckland with a BA in Music with honors.

The Kiwi Music Scholarship supports her to continue her studies in New York where she obtained her PhD in Musical Arts specializing in cooperative piano for singers.

“Before starting Juilliard, I already had a long-term goal of becoming a university professor of collaborative piano in New Zealand,” says Grace.

“New Zealand is full of young pianists who are excited to work collaboratively, and earning a PhD at Juilliard will allow me to become a part of helping them grow into the future.”

Harry Gregg, 25, from Cheviot in Canterbury, received a Kiwi Music Scholarship last year and was awarded a second award to continue his studies towards a master’s degree in performance at the Royal College of Music in London.

Harry graduated from the University of Auckland with a BA in Music with Honors, having previously studied at Te Whare Wānanga o Otāgo – University of Otago. He has performed extensively in New Zealand and Australia in concerts and with the New Zealand Opera (NZO).

Covid-19 has dominated much of Harry’s time at Imperial College, he says, with classes online, only a select number of in-person practice sessions, and deferred quizzes, tests and assessments.

Despite this, he says, “I’ve continued to develop my language, I’m singing better than ever, and my technique continues to improve. There is still a lot to come, including intercollegiate competitions and opera scenes to work on. I can’t wait to get back to it.” theater and collaborate with my colleagues. ”

April Jo, 24, from Christchurch, is halfway through her Master of Arts degree at the Royal Academy of Music but is currently in New Zealand, stranded by Covid-19 and waiting for her visa to be processed so she can return to London.

While in New Zealand, April performed in the finals of the national concerto competition, finishing third. In London, her performance opportunities were disrupted but she nonetheless says the opportunities and experiences she had “really enhanced my musical education”.

One of April’s most cherished experiences is the borrowing of Enrico Cerruti’s 19th-century violin from the Museum of the Royal Academy.

“The instrument has this incredibly resonant tone, with a nice, soft top register, and it helped me build a broader palette of colours, textures, and dynamics,” she says.

Abril graduated from the University of Auckland with a BA in Music with honors, has been an unofficial violinist with the NZSO since 2019 and the Christchurch Symphony Orchestra since 2014, and was musical director for the NZSO National Youth Orchestra in 2019.

Next year, she will be a young artist at the Wakatipu Music Festival in Queenstown.

Describing Sophie as an emerging artist with a rare distinction, she says that her time on the program has given her “fantastic opportunities to work with great musicians, directors, and stage management.”

She was also part of Whānau London Voices: Voices of Aotearoa, away from home, where UK-based New Zealand opera singers congregate at the Royal Albert Hall.

Sophie previously completed her MA in Performance from the Guildhall School of Music and Drama in London, as well as a Bachelor of Music with honors and a Bachelor of Commerce in Accounting from the University of Otago.

She was the winner of the Dame Malvina Major Foundation Wellington Aria competition in 2019 and the finalist at the Lexus Song Quest in 2016.

This year, she was a finalist for the Annual Overseas Music Vocal Competition (she won the Tait Memorial Trust) and a Kathleen Ferrier Award semi-finalist.

Claudia Tarrant-Matthews, 23, from Wellington, was awarded a Kiwi Music Scholarship last year and received a second scholarship as she furthers her Covid-influenced, predominantly online studies to get a Master of Arts degree at the Royal Academy of Music with a professional diploma there Specialized in playing the violin and playing the piano.

The concerts are often in partnership with Kiwi Music Scholarship recipient Mody Ding, with whom she formed The Awa Duo last year. This collaboration contains upcoming shows at Southwark Cathedral and at the Royal Academy Concert Series.

“Creativity and collaboration are essential parts of building a career with a professional performance, and with the help of the Kiwi Music Scholarship, earning a professional diploma at the Royal Academy will help me enrich and develop these skills,” Claudia says.

During her time at the Royal Academy, Claudia held key positions on several in-house projects, such as the Academy’s Elite Orchestra, Soloists and Symphony Orchestra.

She is another former concert director of the NZSO National Youth Orchestra and currently plays regularly with the London Philharmonic Orchestra (LPO), including their tours to Turkey and Germany earlier this year.

In July, she was the concert director for LPO’s ‘Debut Sounds’ concert at the Royal Festival Hall, in association with the Foyle Future Firsts chart in which she is currently a violinist.

A talented pianist as well as a violinist, Claudia graduated with a BA in Music from Te Herenga Waka – New Zealand School of Music at Victoria University of Wellington – Te Kōkī.