Weight class changes, injuries and a fishing scholarship: The story of Brad Wilton 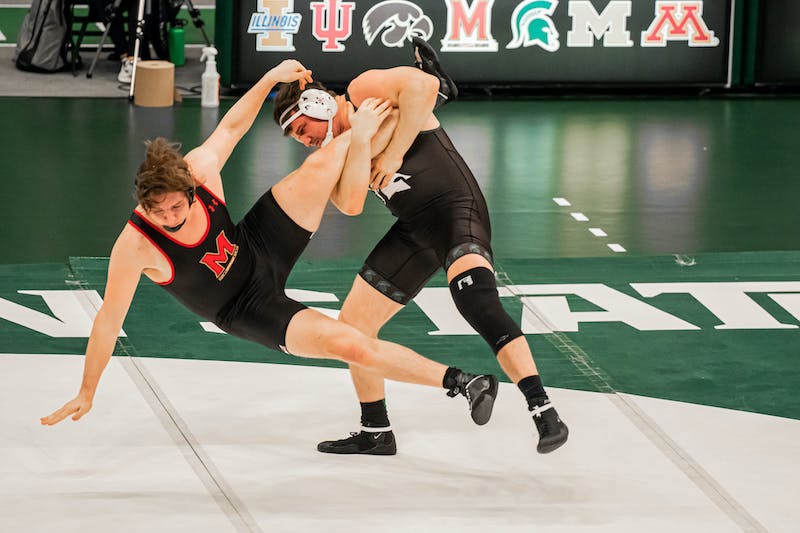 Redshirt senior Brad Wilton — who currently weighs 209 pounds — stepped into a less than preferable situation just over the past two weeks joining the heavyweight class for the Spartans for injured heavyweight graduate student Christian Rebottaro.

That’s nothing new for Wilton, who’s been on an unorthodox path his entire life.

Wrestling at Michigan State was never the end all be all for Wilton, but his success on the mat — along with coach Roger Chandler’s relationship with Wilton’s father — helped him get to where he is today.

“I have known his dad for quite some time, he has been bringing Brad up here at a very young age to our wrestling camps and our wrestling club that we had going on at the time and obviously that progressed into a really strong mutual relationship, Chandler said.

After watching the Spartans for years in the Jenison Fieldhouse, Wilton had a phenomenal high school wrestling career. Although, wrestling in college was not always set in stone for him.

“Brad was always a great football player … and I did not know that he had aspirations to wrestle at the (Division I) level and so I never really recruited him,” Chandler said.

All of a sudden, a call to Chandler from Wilton’s father changed everything.

“I will never forget where I was, 1855 Place had just opened up and I was driving around the front of it and he called me and asked if I had any interest in Brad. Heck yeah I did,” Chandler said. “I knew the type of kid Brad was and I knew the toughness his dad instilled in him at a very young age and so it was just a natural progression for him to be a part of the Spartan family.”

Wilton is one of many talents, and it just so happens that a bass fishing scholarship to Adrian College almost prevented him from ever accomplishing what he has done at MSU.

“I had an opportunity to fish but I thought that I could only wrestle for so long,” Wilton said. “I had a guaranteed four to five more years if I am lucky in college to wrestle and fishing will be there for pretty much the remainder of my life so I figured I would take the opportunity that I had to wrestle and finish my wrestling career out and hop back into fishing after college.”

Now Wilton finds himself competing for a top 25 wrestling squad, at least 40 pounds lighter than his opponent, attempting to earn his squad points for wins.

Like in everything so far in his life, Wilton has taken a detour and had to make a large adjustment.

“It’s huge, you’re weighing in at 40 plus pounds underweight than your biggest opponent,” Wilton said. “Like I have been telling the coaches too, it is a different style. It is kind of like a learning curve almost. You kind of have to adapt and overcome some of the things that you used to do that don’t really work anymore at this upper-weight class and just try to use my size, being undersized, as an advantage.”

Before bursting onto the heavyweight scene last week after downing his 255-pound opponent from Indiana on a 2-1 decision that helped boost the Spartans into the national rankings, Wilton has struggled to find a consistent spot on the squad ever since his redshirt freshman year .

After his decorated wrestling career at Mason High School, which was highlighted by being named a three-time varsity captain and All-State wrestler, Wilton earned a scholarship to MSU and went on to go 21-8 overall in his first year.

He then went on to go 21-14 in his redshirt freshman year, which was good for second on the team in wins.

Do you want the news without having to hunt for it?
Sign up for our morning s’newsletter. It’s everything your friends are talking about and then some. And it’s free!

Things have changed quickly this season for Wilton though.

“This year I was able to solidify a spot at heavyweight and it has been a dream come true to be a part of this group,” Wilton said.

Solidifying a consistent spot on the team has been no easy feat for Wilton. Chandler can vouch for how difficult this sort of a massive transition can be for a wrestler such as Wilton.

“His style wasn’t set up to be successful at heavyweight so he had to make some big adjustments in a short amount of time,” Chandler said. “Typically Brad likes to attack, get at the legs and score. … He has adjusted well though and I think he realizes now that in order to put yourself in position to win you are going to have to hand fight first and then let the match fall into place.”

Wilton does not take this chance he has lightly.

Now that Wilton’s career is almost over, Wilton has high aspirations for both him and his team for the end of the season.

“The ultimate goal would be to be an All-American individually and I would love to be competitive and as competitive as I can be at the weight class,” Wilton said. “Team-wise, we would like to strive and do great things in the Big Ten Championships and in the NCAA Championships.”

The result of Wilton’s goals will come to reality soon enough as the Spartans only have four more regular season matches before championship play begins.

Rest assured, the bass fishing game will be waiting for Wilton with open arms.

Share and discuss “Weight class changes, injuries and a fishing scholarship: The story of Brad Wilton” on social media.